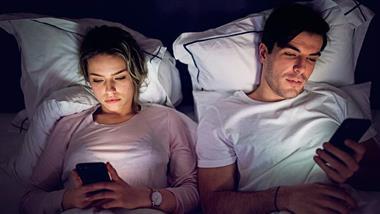 Before the invention and distribution of artificial lighting, the sun was the major source of light and determined how people spent their evenings. It is easy to take for granted the extended days and added lighting. However, humans and animals are paying a price as it throws off circadian rhythms, interrupts sleep and affects the development of disease and perpetuation of animal species.

One pervasive light source comes from digital devices, which become more popular every year. Mobile device use varies, but research shows desktop device use is important during daytime hours, and mobile use increases in the evenings and at night.1

Recent research demonstrates how blue light emitted from your favorite digital device may be speeding eye damage and accelerating macular degeneration (AMD), the leading cause of blindness.3 Before sharing specifics of how blue light interacts with your eye, let’s quickly review some important eye structures and nutrients for eye health.

Your ability to see occurs as a collection of structures that help to gather and send information to your brain. One of those structures is the macula, a small area just 2 millimeters wide, located in the back of your eye. The macula is in the middle portion of the retina and made up of light-sensitive cells called cones and rods, which are essential for central vision.

Light passes through the cornea, a dome-like structure over the eye, which bends the light through the pupil and aims it at the lens.4 The lens focuses the image on the retina. Photosensitive tissue called photoreceptor cells in the retina help convert the light into electrical signals that travel along the optic nerve to your brain where the information is processed, and you “see.”

The light passing through your eyes is in a range of visible and sometimes invisible light rays. Sunlightcontains red, orange, yellow, green and blue rays, depending upon the energy and wavelength of the individual ray. When combined, it creates white light, or sunlight.5

Without photoreceptor cells in the retina, visual information would not trigger a biochemical response.8 This biochemical response is due in part to a molecule called retinol, a form of vitamin A. This is what was studied by the University of Toledo researchers.

Although mobile device use is prolific among teenagers, most adults spend more time on their digital devices then they may believe. In a national survey including 1,800 parents of children ages 8 to 18, the researchers found adults spend an average of 9.3 hours every day in front of a variety of digital screens.9

The study from the University of Toledo found blue light emitted from digital electronics may accelerate AMD. According to the researchers, the blue light affects..................READ MORE